Showing posts from July, 2022
Show all

What Would Life Be Without a Few Roadblocks? 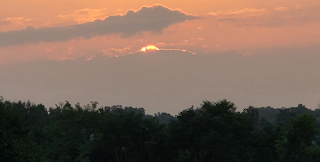 Enjoy a sunrise photo instead of hacking content. Naturally, once I got the lab built back up and everything would be when my server would die again. So for the past few days I've torn the server down to check everything, run all 8 drives through Hard Disk Sentinel to check the status and make sure the disks themselves weren't bad (all 8 disks scored 100%, despite all being used drives I picked up with the server years ago. I think they're from ~2014?) and then wiped all 8 drives just to be safe. I re-assembled everything, powered it back up and initialized the new Virtual Disk...annnnnnd another drive vanished.  At this point, I'm thinking the SAS Backplane that the drives actually directly plug into that sits directly behind the drive bays may be bad, but for the time being, I just popped out drive 3 which was throwing the error and made the extra 7th drive a hot-swappable drive. This means I'm down to roughly 2TB of space instead of the 3+ I had previously, which
Post a Comment
Read more

Part 1 of the Active Directory series. Wilkommen, everyone! After a few hurdles with my homelab server throwing a fit and forcing me to frantically recover my VM's so I could get all of my files off of my file server and temporarily into the cloud, I'm back with a new setup. I've moved from Hyper-V to ESXi, which I always liked for the ease of the web interface, and I've finally been able to recreate my hacking lab as well as my Kali machine that I use to learn on. As I work towards a pen test certification, I've been using a handful of resources to learn and get hands-on time. First up has been the great Active Directory rooms at Try Hack Me . The other has been the great Complete Practical Ethical Hacking course from TCM. This lab will be setup similar to the lab in the PEH course, as it makes it a bit easier to follow along with Heath's videos. There's always Hack the Box to get some hands on time as well, but that's something better saved for anot
Post a Comment
Read more
More posts